Winter arrived with a vengeance last weekend. Woke up Saturday morning to -30; Sunday and Monday was -35. Since then it's been between -17 and -20, which is much nicer but still pretty cold.

I started out today rather poorly. Went to work, parked the van and got stuck. As I walked around the van to see how badly stuck I was, I noticed the back tire was really low as well. When I got home after lunch I also found out that I had forgotten to unplug the van before I drove away. All in all, not a great start to the day.

I have been doing a lot of work this past week volunteering for AWG. I have made presentations to opposite ends of the age spectrum (teenagers at one of the high schools and then seniors). I also made informal presentations to both of my classes. Bram helped me prepare the PowerPoint presentations. There's also been several meetings and tomorrow there's a big rally with the hopes of signing up more volunteers (I'm on the committee that's job is to get and train the volunteers). For AWG we're going to need about 2500 volunteers; to host the approximately 2000 athletes, cultural performers, coaches, etc. When you consider that Yellowknife has a population of approximately 20 000, that's a lot of volunteers. More than 1 in 10, especially since you have to be 12 or over to volunteer. So anyway, I will have done about 12-14 hours by the end of this week.

Rose is talking to us on the phone right now. She's confessed that she's lost her bank card, is broke and has also misplaced her student card (so she can't eat in the cafeteria). I have suggested that she start looking for things. This week she's missed supper every night, for a variety of reasons. Also something I'm not encouraging. Several of them she's slept through, so Lloyd's talking to her about setting an alarm to go off right before supper.

Bram has been working most of the week on his English. He's been writing a short story. He doesn't like writing stories. He's also not finished, but I'm not letting him off the hook because my deadline for him was today. So he's going to have to work on it over the weekend, because he does have other subjects besides English to keep up with. Having said that, I'm really behind on the WebCT course that I've been taking. I need to get back to work on that. I'm also a little behind on my marking.

Lloyd has had a hectic week at work, but he says he's gotten through nearly everything he wanted to, so that's good.
Posted by May's Musings at 7:57 PM No comments:

I'm trying to post this so that you can see it. Here it is: http://www.geocities.com/xlloyddt/brambible.ppt
You'll have to download it and then press F5 for it to run properly. If you don't have PowerPoint, you may have to go to Microsoft.com/downloads. Then go to the Office link and download a PowerPoint viewer to see it (when I was there it was the third from the top).
Posted by May's Musings at 9:55 PM No comments: 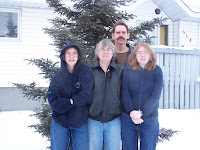 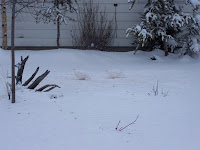 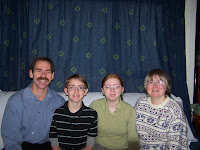 Last weekend was a long weekend, which was good. What was better was that Rose came home. I hadn't seen her since she went to Western the last week of August. It was really good to see her again. We're delighted with how well she's doing at school but it was about 10 weeks since we'd seen her, so it was good to be able to. I wonder how the parents do that send their kids from further away, and only get to see them at Christmas.
It continues to be winter here. The ice on Frame Lake is thick enough that Lloyd has been taking out the four wheeler and plowing a number of paths for the pedestrians that walk across the lake to work. It's been well appreciated. Bram and I went out with him this morning on the snowmobile while he was on the four wheeler. It's still a balmy -5 out, so it wasn't cold. We had fun. The ptarmigan have migrated south to Yellowknife for the winter, however, and I've included a picture of what they look like.
It was report cards at work for me last week. I had one student who couldn't make the student/teacher meeting because she had a court appearance, but everyone else made their interview time - which is good. Generally speaking, they're all doing well, and I'm pleased. Rose and Bram are also doing well at school. Bram did a really impressive powerpoint presentation for his Bible class, and once I figure out how to post it on here, I'll let you see it. Rose brought a bunch of homework home with her last weekend, and got most of it done. She had a five-hour layover in Calgary, so I'm hoping she finished up her homework then. I'm supposed to be working on my WebCT course, but haven't done anything much on it. I need to get an extension, I guess, and then work on it without interruption for awhile.
While Rose was home we tried to take family photos. We had tried over the summer to get them commercially done at some (inexpensive) place like Walmart. However, Walmart up here doesn't have a photostudio and down south you have to come back in ten days to pick up your photos; they won't mail them to you. So, we didn't get them done. We posed outside beside City Hall, but none of the pictures of the family turned out. So then we tried outside by our front door. But Rose looks like she's acclimatized to the warmer weather down south and looks freezing instead of happy. So we tried a third time on our couch. They're not great photos, but they're ok. I'd still like to get some professional photos done.
Posted by May's Musings at 4:28 PM No comments:

Lloyd and I have finished our First Responder's Course (level 1). We took the final exam on Sunday and passed. It was a very intensive course; forty hours in two weeks - all outside of regular working hours. We learned lots, enjoyed the course and are very happy it's finished. One of the instructors was telling me that we should really take the level 2 course now, but I don't think so. I'm happy with what we've got.

Lloyd took the course because he volunteers with Yellowknife Search and Rescue and it'll be helpful for him to have the First Responder's Course for that. The reason I took the course is because I'd like to volunteer at Arctic Winter Games, which will be in Yellowknife, March 9-15, 2008 (or 124 days from now).

What are Arctic Winter Games, you ask? Check out http://awg2008.ca/ - to find out more; but think Olympics (only a lot smaller) with many different events that the Olympics don't have (things like Snowshoe Biathlon, Inuit Games, Dene Games, dogsledding and many cultural events). It's only for the circumpolar world (Alaska, Yukon, NWT, Northern Alberta, Nunavut, Nunavik, Greenland, the Saami people from Europe, and a couple of Russian provinces), and it's quite an event. Here is your opportunity! If you'd like to come visit - the AWG is an excellent time to come. We have a spare room (seeing as Rose is at Western), and Walter and Faye also have a spare room (I'll volunteer them too). Come see us! Plan your holidays now!
Posted by May's Musings at 8:28 PM No comments: