Rose is at work - only one more work day for her left. Bram's supposedly finishing up the last of his calculus assignment (far more likely to be playing games on the computer).

We had a lovely Sunday afternoon church picnic. It was supposed to be up at the Evratz park - but they had it closed to the public for a staff picnic, so it took awhile for everyone to get the phone call about where we were meeting; but it did happen. We've had three days without rain now. They've been very nice.

Value Village has a half-price sale on tomorrow. Ruth, Rose and I have a date to be there at 7 when they open and pick up the clothes we picked out this afternoon. Seeing as Ruth is doing the incredible shrinking woman, she's needing new clothing all the time. I'm also shrinking out of my stuff and could use some more. Rose needs hot weather stuff for Quebec and Ottawa. We've also picked out some clothes for Rachel and Kristin - who are doing the opposite of shrinking.

I got all of my report card marks in Friday. Only three more days of work left! Feels good.
Posted by May's Musings at 6:32 PM No comments:

Bram and I got home from a short visit to Gravelbourg last night. We had gone for the Festival du Soleil as part of a field trip for the French students from Western. We had met up with the Gravelbourg youth group while we were there. Although the sun wasn't much in evidence - it poured rain much of the time, and was overcast the rest of the time; everyone enjoyed themselves.

We spent the night at the church building, as did the youth group. This allowed everyone to get to know each other a little better. They played an ice breaker game, then had a crokinole tournament, and followed up with watching movies and playing spoons. I crashed around midnight in the cry room, as I had been awake since 5 am, but there were other adults supervising as well, and I wasn't essential.

It was also really good to see and visit with my cousin, Janelle a bit, and to see her kids. Bram was paired up with Tyson for some of the activities and they seemed to enjoy each other.

Friday night there was an international food festival in the arena. All of Saturday's events were moved to the arena as well, because of the rain. We did a tour of the museum and the cathedral Saturday. (We had a choice of taking the tour in French or in English.) I did the tour in French (as did most of the students), and while I may not have caught everything; I got the gist of pretty much everything, I think. It was fascinating! We ate lunch at the Cafe Paris - good food; not too pricey; definitely worth the visit. The kids helped volunteer at different things during the festival. It was easy to do, as everything was at the same venue.

One of the students was telling Monica that the trip exceeded their expectations. I know that all the ones I had in my van really appreciated it. However, it was also really good to be back home in my own bed last night.
Posted by May's Musings at 7:56 AM 1 comment:

It's before 7 am, Friday. My parents have just left to go back to Saskatoon. It's been so nice having them here with me this past week, but they were anxious to go home. No one else is awake or up yet.

The big news this week is that Rose has been accepted into the program of her choice, International Studies and Modern Languages at the University of Ottawa. We have confirmed her acceptance and have put in her request to live in residence so far. She still needs to register for her classes and take a French test. However, she'll be taking French Immersion in Quebec all summer, and she doesn't have to take the French test before August 31, so I've recommended that she put off taking the French test until she's finished her summer program.

Rose has requested for her birthday (end of May) that I make her up a cookbook with easy to make recipes for her to use while she's in Quebec, as she's staying with a host family, but has requested kitchen privileges instead of the meal option because of her allergies. Any suggestions? Please send them to me on Facebook.

It was awards day yesterday at Western. I MC'd it, which was really easy. I just introduced the next presenter each time. Bram won awards for honour roll and spirit of cooperation. He figures he must have sat third place in the class standings or he would have gotten the bronze medal if he was second place. His goal is to be second place for grade 12. (To supplant the girl in first place would require way too much effort.)

Bram and I take off this afternoon for Gravelbourg for the Summer Solstice festival. Unfortunately, it's raining really hard and the forecast is for rain the entire weekend. So I washed the mud off my rubber boots and will bring them along; I also bring shoes instead of sandals - what more can I do?


My computer is still giving me grief, but I have everything backed up. I turn it off carefully when I'm done working on it, instead of leaving it on. Then it doesn't freeze up, forcing me to do a hard reboot. That's the best I can do.
Posted by May's Musings at 5:43 AM 2 comments:

It's that quiet time after everyone has gone home. Bram went to have his hair cut (thank you, Amelia)and then to small groups. Rose is working, and Betty is, as usual, in her room. I have chicken soup on the stove for supper. I think I'll make dumplings to go with it.

We had over 30 for Sunday dinner today. I think I counted 32 - but there could have been more. It was a nice crowd, we all were able to visit - the kids enjoyed the WII and played Sorry. One of the girls who comes to The Party regularly was at my house for the first time. She came to the living room once, looked confused and said, "OK, I'm lost. Where's the room with the WII?"

Monday I'm hosting the Grade 9 class party at my house - at noon. That is, assuming they all get their permission forms back. Tuesday is the final day for The Party - a wind-up barbecue. I need to get some supplies for that. Friday night and Saturday there's a field trip to Gravelbourg for the French students. We're definitely in the wind-up mode right now. I'm fine with that.
Posted by May's Musings at 4:26 PM 1 comment: 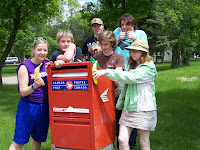 OK, I want you to know that I NEVER post pictures on my blog - but I actually had photos to post - so I attempted, but the computer was having none of it. It took me two tries and about half an hour - but I managed it!

We had Farewell on Thursday. Farewell is an afternoon and evening planned by the staff as a present for the students. It's always fun - and it's always a surprise. This year Farewell was a bananarama. It was like a car rally; we were all divided up into groups with a list of things to find the measurement of (like the length of the bottom step at the Legislative Assembly, or the length of a stranger's arm, or the circumference of the pig in front of the Connaught Library) - however, you were to measure them all with a banana. We were also to take a picture at each stop. The first thing to do was to take the supplied toonie and purchase a banana. By the end of the quest, the bananas were black! We all met at Willow Island at 4 pm; the ferry took us across and we had a barbeque (hotdogs) and banana splits (of course!). I think we all had fun.

My computer gave me the blue screen of death today. We turned it off and rebooted it and it seems to be ok now, but I'm nervous about it. I think I'll buy a hard drive and back everything up.

Ruth and I made salads as usual this morning. We made a couple of new ones that are really good. One of them was supposed to be a layered salad, but we weren't paying attention and started tossing it, so then we had to finish tossing it. It's really good, but I expect it would have looked spectacular if we had layered it. It tastes really good in a pita.

Rose put in her two-week notice this morning at work because she'll be going to Quebec at the end of the month for the 5-week French Immersion thing. I hope she has a wonderful time there. She's busy trying to pack everything right now - on top of working and school and everything else.
Posted by May's Musings at 6:31 PM No comments:

It is the countdown to the end of the school year. We're into June and there is a finite number of days left. Farewell and Awards Day are coming up, as are final exams. Rose is going to Quebec for the five week French Immersion experience, and Bram was charting out his summer holidays last night as well. (Burn camp here, Mission 6:10 here, what dates are Heritage Camp?) He's planning on driving to the Yukon with his dad for two weeks as well. I don't have such extensive plans for the summer. I think my plans involve a whole lot of deep breathing. I'm not taking a summer session, and I'm really not planning on going anywhere exciting. I'll be helping with Clearview Camp for a week, and with Mission 6:10. Aside from that, who knows?

I've been waking up hoarse every morning and I think I need to break down and go back to the doctor and get a prescription for Nexium again. I haven't needed it for a couple years, but I seem to be back needing it again. It's for GERD.

I switched from my winter breakfast (Red River Cereal with raisins) to my summer breakfast (spoon-sized shredded wheat and bran with bran buds and frozen blueberries) yesterday. I also discovered that I can eat porridge in the morning and last until noon, but when I have cold cereal for breakfast, I only last to about 10:30. So I guess I need to bring a snack with me too. One thing I'm really looking forward to is only having to make my own lunch and supper over the summer.

Time to rush off to school.
Posted by May's Musings at 6:45 AM No comments: